Mady made it through 1st grade with flying colors!! We're so proud of her!
She receive two awards. Citizenship award, for always caring and helping other in her class, and she was on the Honor Roll for the whole year.
The PTA put together a field day for the kids, and they spent all afternoon outside playing games and doing fun activities.
She had a great year, and she's looking forward to being a 2nd grader.

We are all ready for summer and the fun that it brings. We have a water fight planned for this afternoon with all the neighbor kids, to kick off summer. 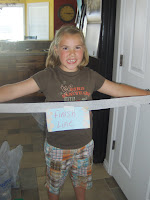 I was going to wait and do Jay's update in a few weeks when he turned 10 mos. but he started doing so many things this last week I couldn't wait.
While at Mady's soccer game Jay loved playing with Koby's baseball helmet. The helmet was too heavy for Jay to hold his head up on his own, yet he didn't want to let it go. 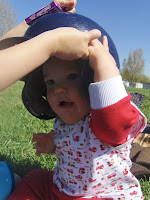 Jay is OBSESSED with Sticks!!! We just find him a stick outside and he's entertained for an hour. Not exaggerating. He loves the broom. He drags it all around the house from the kitchen to the back bedrooms. It's a Big Heavy broom So I bought him a bat that looks wooden. He loves it and carries it everywhere. 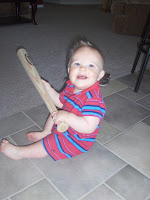 We're getting him ready for baseball.

Jay's also crawling up the stairs. He doesn't have the going down figured out but he can sure get up them fast. 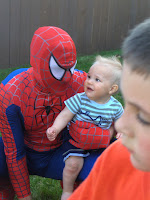 Jay was invited to his first Birthday party. Our neighbor boy Jackson turned 3, and spider man was in attendance. He wasn't to sure about him. There were lots of kids running around, it was hard to get a good picture. That's another neighbor boy Koby in the picture. We love our neighbors and their kids. We're so lucky to have friends as neighbors. He also got TEETH. 9 mos to the Day his first one showed up and then a day or two later the second one came through. We had no idea cause he wasn't fussy or anything. I was feeding him his cereal and saw his new pearly white. So he official has teeth. YEAH!

And in other news He took 3 steps last night. He won't be a baby much longer.

He is still VERY BUSY! It's always a RACE,

It seems like we've had something going on every day these last 2 weeks. So I'm a little behind. Last week our niece Shay graduated from High School. It was fun to see her close a chapter of her life and start an new one. She's headed to Ogden to go to school. She wants to become an x-ray technician. She will be the third one in our family to choose that career path.

Every time a niece or nephew graduates I take their picture and blow it up about 400x and cut it out and glue it to a ruler. I usually make enough for everyone who will be attending graduation. And then we hold up during graduation. It's just something silly. But I think they feel extra loved/ or extra embarrassed! Either way it's fun for us. 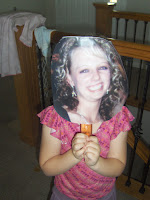 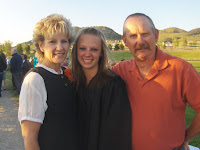 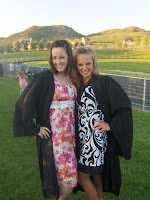 Jessi and Shay
This was Jessi's first year teaching at the High School. She had to walk with the students. She is not a graduate, but a teacher.

Brooklyn had her Pre-school graduation today. She's been excited for weeks about graduating. 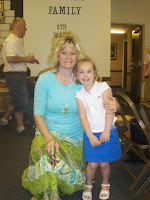 Mrs. Joni has been fabulous!!! We were so lucky to have her. She's calling it quits after 20 years of teaching preschool (out of her home) . She's an amazing women.
Miss B is ready for kindergarten yeah :) We found out that she will be in A.M. I don't know how I feel about that. I have a hard enough time getting Mady's hair done. Now I'll have Brooklyn's too. School starts at 8:24am That is just too early. 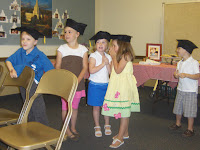 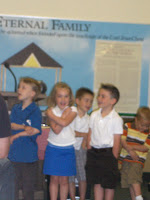 There were only three girls in the class the rest boys (7)
The picture on the right is Brooklyn and Ashton. I don't know why it loaded blurry. sorry
Ashton lives down the street from us he's such a sweet boy!! He was so cute he kept an eye on Brooklyn during the songs. He cracks us up. 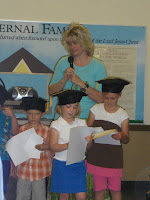 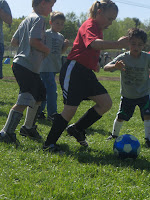 Sadly it was Mady's last soccer game on Saturday. She has thoroughly enjoyed playing !! We are so proud of the attitude she had while playing. She was a great team player, and we enjoyed cheering her on from the sidelines.

Visit from Nana an Papa 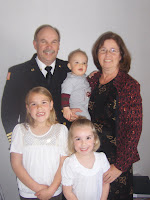 My parents came for a visit. Unfortunately it rained most of the time but we still enjoyed their visit. They brought a present for the girls. Thanks to Uncle Bob and Aunt Cathy.(It was in their backyard and my dad and brother took it down and my dad brought it to us. Nice I know!) Papa spent a whole day setting up a swing set for them. And there hasn't been a day that they weren't out 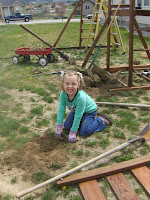 -Brooklyn loves to help.
there on it. They LOVE it !!! So THANK YOU SO VERY MUCH.
While Papa was out putting up the swing set I kept Nana busy with some mending of our clothes. She made Jay a new crib sheet, a slip for Mady and surged various things with fraying ends for me. Thanks mom for all your help. It should hold us until your next visit. Papa also did a few odd jobs that Jappy and I didn't know what to do with Thanks Dad! 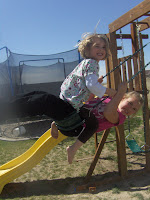 Papa had a convention in Idaho Falls so we spent Friday with them at the pool. The kids were in 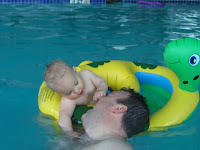 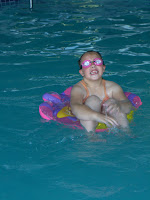 there for 3 hours and they were in heaven!!
. Jay especially enjoyed his time in the water.
My mom and I started a new hobby (sorry dad) We 've been making watch bands out of beads. It's been fun and they've turned out really good. So while the kids were in pool we were busy stringing beads. I didn't take any pictures of them I don't know why.
While they were here they got to watch Mady Play soccer, and Jappy had his first game of the season for softball.
We love having them visit, and it never seems like its long enough. The girls are already counting down the days till we see them again. We love you Nana and Papa!! 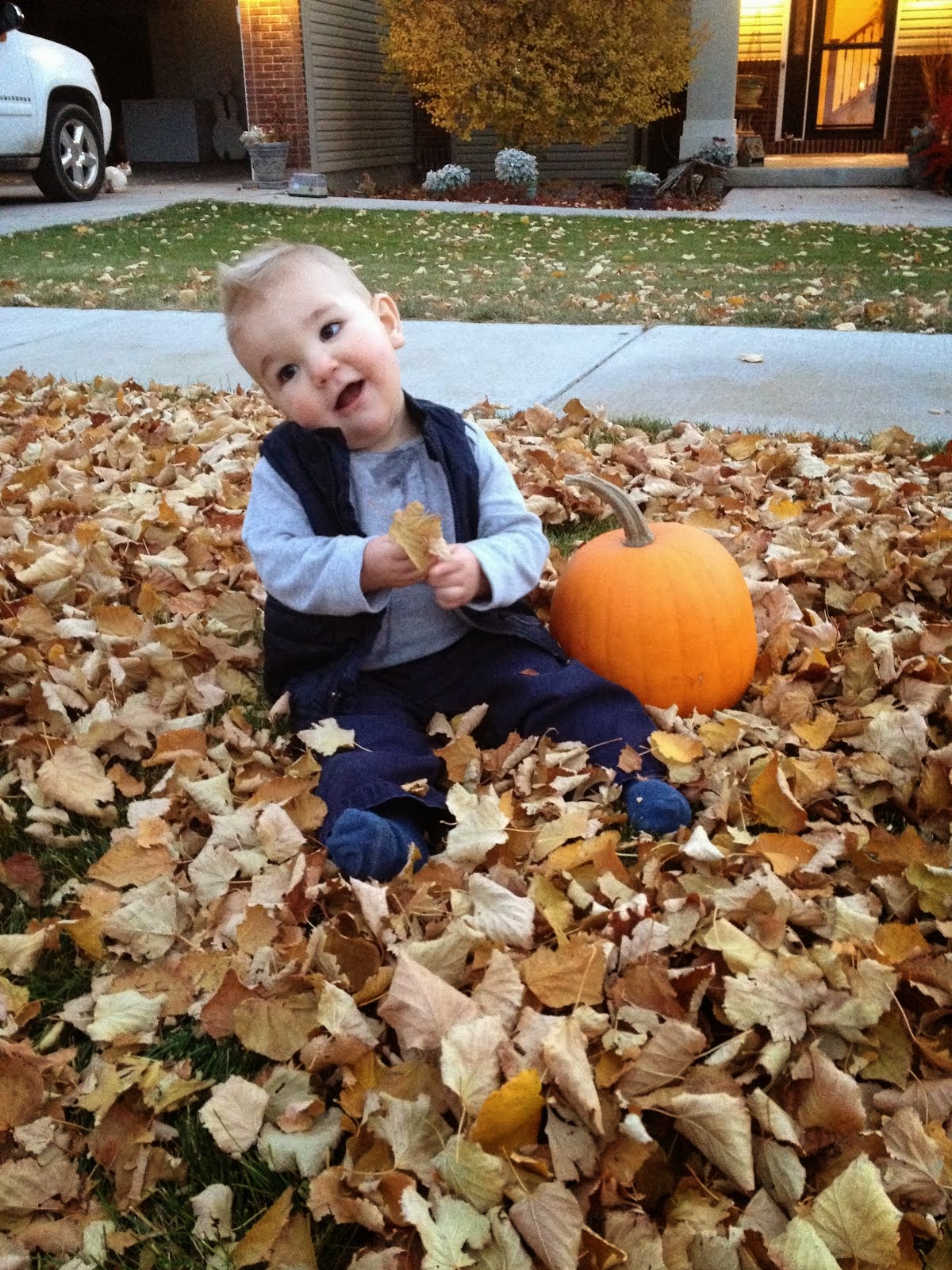